Of course, there will be those who argue that on race day, everyone has to deal with the same factors. This is spot on, and what racing is all about. It is how you, as a competitor, deal with the variables is key to your result and overall feeling of the race, to whether you make a good time, enjoy the race and even could decide on whether you finish or don’t finish the race.

To me, trail running throws many more variables into the mix. Which I guess is all the more reason to run a trail event. After all, it is never too late to learn new things in life. This would be only my third trail race, so I ran this as a relative novice.

I’m never quite seeking out a trail run, but earlier in the year, a good friend, Alan C, said he would be keen to go if others would join and after reading about the location, it seemed like a wonderful event. The event was a smaller independent event called Three Peaks Yatsugatake Trail. Not sure what it was exactly, but the entire presentation of the event looked very different to other races.

Common sense and knowing my general fitness and inexperience meant that I opted for the shorter “Attack Line 23km” course rather than the longer trail. However surprisingly, the longer and much more challenging “One Pack Line 38km” proved very popular and unfortunately quite a few applicants could not get in this year.

There were a few others from the running club who were interested but in the end, last members standing were just Alan and myself. So we decided to do an easy bicycle ride around the day before the race to explore the beautiful surrounds and also to pick up our race bibs at the registration area. We also popped by the rather excellent Nakamura Keith Haring Museum, a wonderful recommendation if you are in the area.

An early morning start meant an equally early night in the sleepy town of Kobuchizawa. The rain which began in the afternoon ceased by race morning and so did the gusty winds which pushed over some tents at the registration. It was cool in the morning, but blue skies were beginning to show and I pondered if I should carry a rain jacket. However, I reasoned that we were in the alps and the weather could turn nasty in an instant, so a last minute decision was to pack it. This was a lucky decision as I later realised that carrying a storm jacket and a mobile phone were strict participant requirements!

Rushing early morning to Kobuchizawa station, Alan and I were thinking that the tiny, two carriage, local diesel train would be sardine-like packed with runners heading to the event, as the train time table was quite the opposite of frequent. However, to our surprise, when we hopped on, we were the only passengers and we laughed that we chartered our very own race train! What luxury it was!

In contrast, the start area was bustling with activities and the morning sun poked out to make it a glorious Sunday to be outside. Starting at about 1000m above sea level, the longer 38km course reached 2700m elevation. The summit was said to be just 4 degrees Celsius on the day of the event. Fortunately, Alan and I were doing the far more forgiving shorter distance which peaked at about 1600m above sea and much warmer. 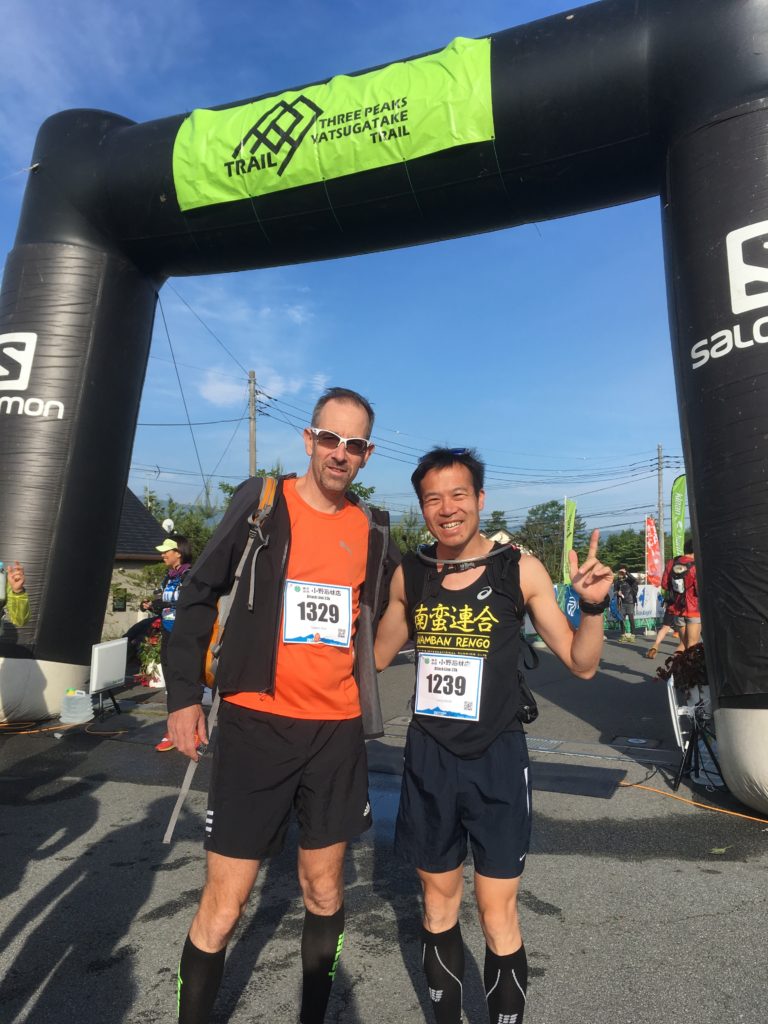 But where this course separated itself from other trail events I have done was that the course was fun. To what I remember, there were no extremely narrow or dangerous ledges to be fearful of, no severe slippery rocky terrain, just open soft ground for the most part and forest so green and lush to envelop you. There was a point in the course where I had separated myself from other runners and all I could see were tall trees and the three dimensional echo of birds chirping from the canopy. The air was crisp, dry and clean I felt right at home.

In hindsight though, I should have done more race-specific training, that is, practice on trails. However, I felt the race would be fine due to the relative short distance and elevation of less than 2000m above sea level. Certainly more training would have made the downhills more manageable! And definitely training would have reduced the muscle pain felt in my quads which prevailed for most of the week following the event.

And yet, training or not, the event was very special. Alan went out like a rocket at the start. I later found out that he was trying to pass people before getting into the trail area where passing was more challenging. Somehow I caught him many kilometres in, on the way up. He seemed to be slowing as we exchanged some jokes, traded positions and I went out in front. However, there were sections of downhill which he was indeed much faster and smoother so we continued trading places for a good part of the race. 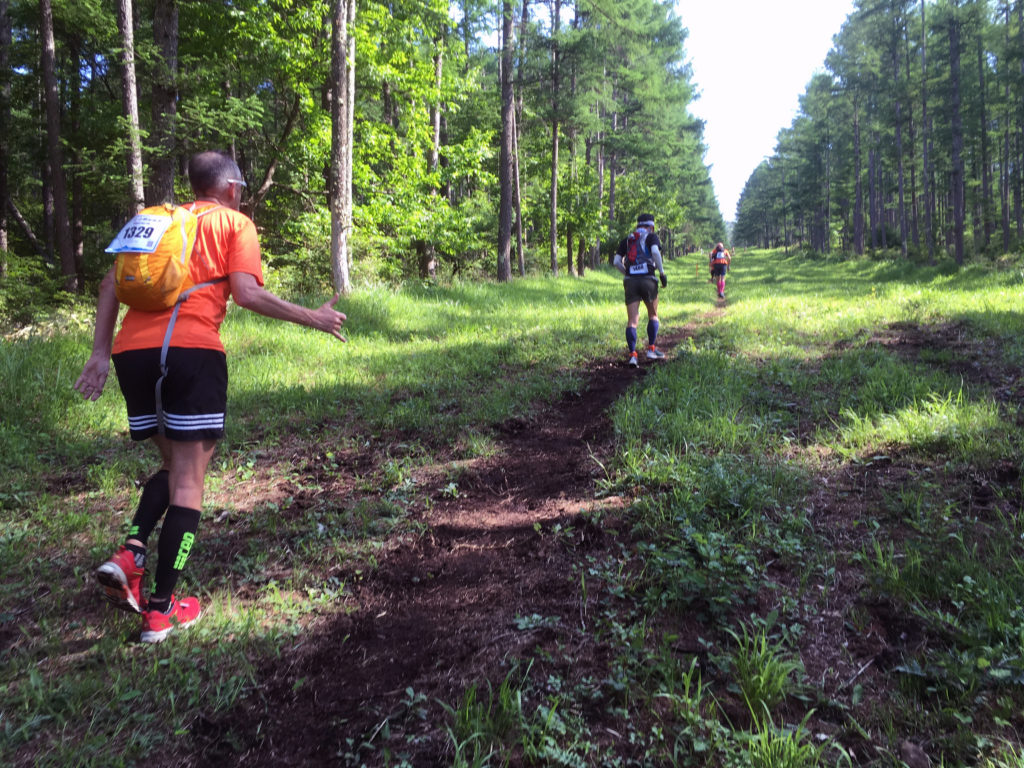 For the last 8km, it was a dominant downhill, the reverse of where we came up and my calves were tightening so it was harder to push. Admittedly, the surrounding mountains were spectacular to look at so slowing down wasn’t a bad option! I decided to pick it up for the final 1.5km after seeing that a sub 2h30m time was possible.

I made it in the end, 2h27m at 85th position overall (of the 543 short-course participants), whilst Alan smoked the downhill section and was a fast 2h20m time and 57th position. A superb effort!

The greatest taste of a cold beverage, sitting outside on camping chairs after the hard slog through the forest topped off an excellent weekend. Popping back on the train with our bikes to Tokyo, we knew that we did what we aimed to do and created many happy memories along the way. Indeed, the weather may play its part for another year, the course may change, but all I can say is that for this moment, for this time, everything fell together and it was a truly enjoyable event.

More info can be found from the official website here (in Japanese) :