Yes, you read right. As the name suggests, it is a Racecourse meant for horses.

This rather offbeat event takes place in Urawa, Saitama prefecture – home of the popular J-League football team Urawa Reds. The event was recommended by Yukiko, and her family friend, Mitsuo-san, together forming a strong six member team with Pat, Chiba-san, Yuiichi and myself. 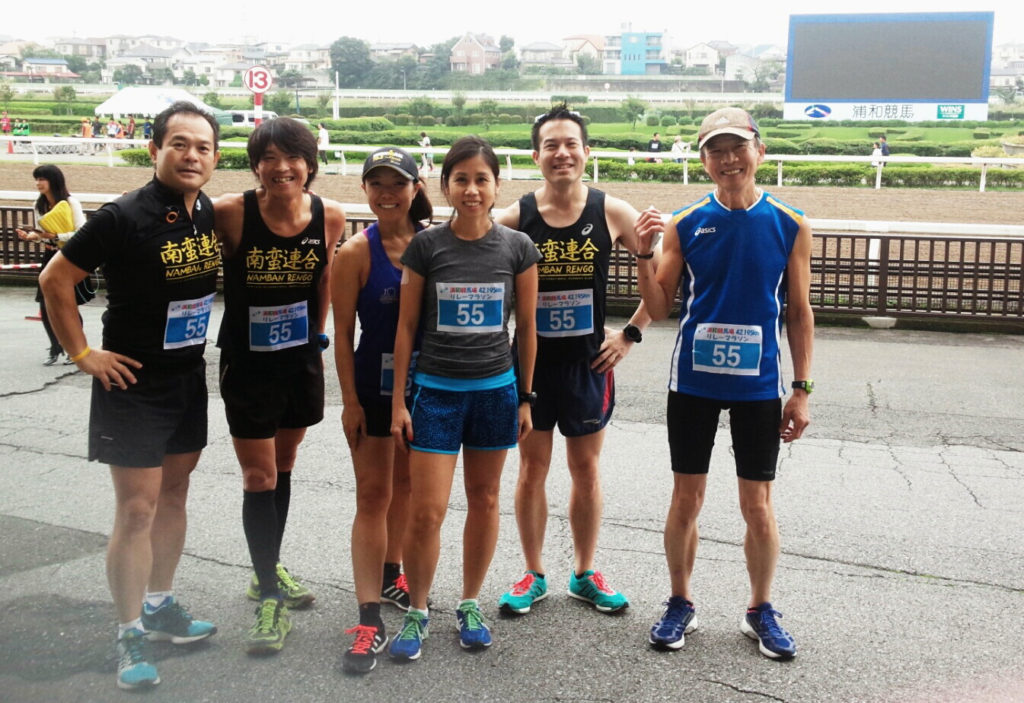 The event takes place on Urawa Racecourse, and the track is dirt (not grass), a very wide 1200 metre oval track. It’s about 10 minutes walk from Minami Urawa JR train station.

Race atmosphere
Once you get over the “oh-my-god” and “what-the-heck” shock that this race is actually being held at on a racecourse for horses, you can just soak in the atmosphere which is really quite pleasant. Naturally, you will hear Rossini’s William Tell Overture Finale on more than one occassion, but also see the various horse posters of “Keiba”, one of Japan’s few legal public gambling activities.

Furthermore, when running in the event, you will also get a rather privileged first hand account of what a horse and jockey would experience in an actual race. OK, so running may not be as thrilling, but certainly it is an experience which doesn’t happen every day for most of us.

Race
The start began from the horse starting gates at a leisurely 10:40am, with the proper operation so the runners began once the gates opened! Due to the amount of rain over the past few days, the track was rather damp in areas, however we all agreed that it was not as bad as we imagined. We likened it to running on a beach, but the sand wasn’t too soft in the main racing line. Off the racing line it was quite muddy.

The passing of the tasuki (relay sash) happened every lap (1200m), although runners were at liberty to run as many laps as they desired. 36 laps of the 1200m loop, plus a little bit extra made for the full marathon distance. After the first few laps, we were ranked about 40th position of 99 teams. However we soon saw that position improve.

At about half way through, the heavens opened and the rain started to fall strongly. We did sense the track was getting muddy in sections. None of us were really used to running on such a surface and so we all thought the race was comical and that it certainly gave our legs a good workout! There was a short section of gravel/tarmac where the handover point occurred, and this felt like a sprint section compared to the thick and sandy track. We loudly cheered each other along at this point, and passed a few teams in this area of the circuit as a result.

Result
We came a respectable 17th placing of 99 teams and collectively, the full marathon time was 3 hours 21 minutes.
Even through the tough weather conditions, incredibly 89 teams managed to complete the full race distance.
The first team through were the Japan National Self Defence Team (自衛隊) .

Links
I would recommend this race assuming they hold it again. It makes a change from the usual events and adds some sparkle to the race calendar. I dare you not to have a grin on your face after running a lap!
Race entry info:
http://nrc-diadora.wixsite.com/urawakeiba/blank-1
You can form teams of up to 10 people.
There is also a 5k run or a 1.4km family/children’s run.