This event is located in Oita prefecture, Kyuushu some 900 km away by plane from Tokyo in the famous hot spring area.

Steeped in history, this event has been going since 1952 back when the roads were still dirt and gravel. It is now a semi-elite race with a qualification time (regardless of gender) of 3h30mins, is IAAF regulated and AIMs certified.

There is even a WADA doping test tent at the end for the elite runners. And actually, there are road re-openings at several sections throughout, something like 10km at 50 mins, half way at 1h 45mins and a few other places, so qualification makes sense.

This year, I believe the field consisted of about 3400 runners and it felt great to be amongst it. Compared to other marathons, this race has not grown large and so it does not feel congested. The weather was sunny and partly cloudy, a bit windy, and about 9 degrees Celsius.

The weeks before
For me, I felt good in the lead up to the event. December 2014 and January 2015 had very favourable weather conditions in Tokyo and hardly any rain, so I could train mostly whenever I wished. I also had fun training with Stan and Harrisson in the months prior and I got many tips from them – plus we would somehow make each other run more whenever one of us became lazy I suppose.

Admittedly, I am not much of a dietician or planner, and some just stuff which works for me, I decided to :
a. abstain from any alcohol for nearly all of January
b. no bread, pasta or coffee for the week before the race
c. sleep properly the week prior race day

Most of the above is common sense, really. But the coffee part was tough! I’d rather run 35km to be honest. Top tip, don’t try to go cold turkey and begin coffee-free life on a Monday when you have a desk job.

On the Friday prior to race, I did some Excel spreadsheet maths and worked out what it would take to do a sub-3 time. I factored in the distance to be longer than 42.195 due to the width of the road, so I put the goal time at 2h56m to give me some buffer in case. Three simple key metrics besides an average pace (which was to be an average of 4m10s pace):
1. What time will I be at the half? 1h 28mins
2. What time should I cross the 30km point? 2h 5mins
3. Where should I be at 2h 30m? 36kms

I wrote these on my hand before the race to remember. The morning of the race, I made myself a coffee, and after a week of having no coffee, it tasted great and had an awesome caffeine kick.

On the journey to the venue, Stan helpfully told me where he was going to take his three gels. I decided to mirror his plan, which was 13km, 23km and 33km marks, all ending in 3 so easy to remember.

Race
The gun was off and I felt the road was wide enough so I could settle into my own pace quite quickly. Actually I felt the surrounding field to be quite mature, without sprinters, an added bonus of having a qualification criteria I believe. It was beautiful to watch, an entire herd of runners going down the road at more or less the same pace.

I noticed another runner who looked a little like the great Haile Gebrselassie from afar (sans bent arm), who was running his own racing line, but I felt it to be the shortest line down the road. I dubbed him “Haile-san” and decided to follow him or keep him in my sights for the most part of the first 25 km.

The road was quite cambered as it is a 3 lane wide coastal highway so this was a little annoying for my knee from the 17-23km mark. But it soon flattened out.

I felt good at the half way point, quite fresh and normal breathing.
I also was fine at the 30km mark, which is unusual. And although I felt a little bit tired only about a kilometre after, the knowing that I would take a gel at 33km kept me going. The energy taken from the gel really helped me for about 3-4 kms after that.

From there on it was all about counting down the last few kilometres. I passed the 3 key metrics I mentioned above slightly under what I had estimated. I knew I was nearly there.

Just outside of the stadium I heard Harrisson, who had finished in a killer time before me. He was screaming out, I saw the digital clock at 2:55 when I entered the stadium and from there it was just a single lap of the track to the goal.

I was absolutely ecstatic after the finish, one of the best feelings ever. A big 10 minute cut from my previous record, Tsukuba marathon in 2013 which was 3h 7mins.

Well, if you couldn’t tell, I recommend this race. 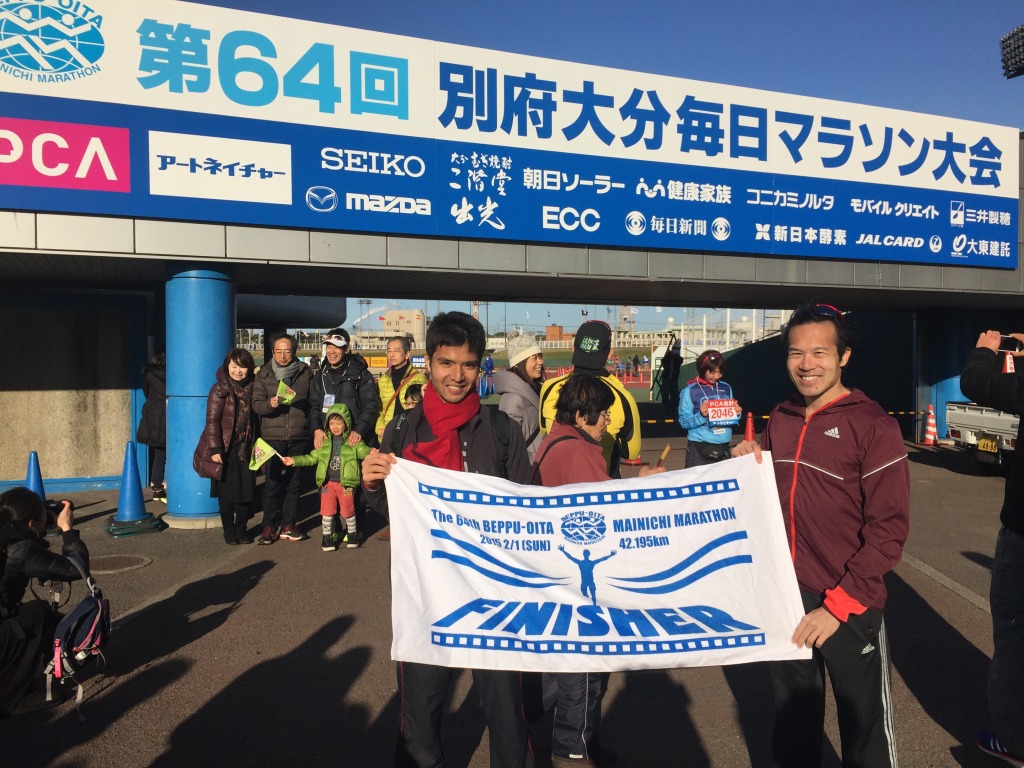 To other runners who dream about sub 3 marathons, keep on striving for it.