On Sunday February 1st 2015, I finally made peace with myself. I have been trying, training very hard from last PB back in Feb 2012 ( Tokyo Marathon 2012, 2:48:49), experimenting countless sorts of diet ( 6kg of body weight fluctuation up and down), many form of training, trying to educate and use myself as a guinea pig, geeking out on everything topics related directly or indirectly to running. Though I’ve learnt a lot, I had yet to get some results out of it.

My biggest failure came in last March where i stopped halfway in Seoul after my legs unexpectedly gave up. Then walking and jogging to finish in 3:23. This time was borderline to qualify me to Beppu marathon for the open category ( sub 3:30).

Training.
I started my buildup around mid September. I’ve come to realize that failures are what makes you stronger and really what teaches you the most. It hurts … it hurts really bad when you fail after lots of hard-work, but there is no better way to learn. When my mind was broken down after Seoul, guys like Padraig who recover from failures so quick and move forward like if nothing happens really inspired me. Trying to analyze every details of my previous race helped me to make a much better training plan.
I firmly believe that there is absolutely no training that fits everyone, whether it’s called Jack Daniels, Mc Millian, Canova etc you name it… They are “only” good templates and the starting point. It is our task ( very difficult one ) to know ourselves, our strengths and weaknesses, physically and mentally to create a highly individualized plan. One of the biggies for me is a tendency to do too much and not stepping back to see how far I’ve gone…. To help me with that I hired a coach, Andy Dubois from mile27 who specialize in distance from marathon to any ultra ( I have searched for a long time to find one that meets all of my criteria). We have the same philosophy of training:
– every runner is unique
– intensity and specificity are king
– intensity cannot be sacrificed for volume and vice versa
– strength training must not be neglected
I never felt the need to question his workouts.
Mostly, he made me peak with a perfect timing with a perfect taper.

In my previous buildup, the volume was too high, and too much work at Goal pace. I felt i needed something more than running, strength training. I was given a set of core exercises to do whenever I could. I did them 4 times a week, 50min per session, replacing my double runs by 1 strength session + 1 run ( so still training twice a day, 4 days a week, and running everyday). Peaked at 141km four weeks out, with 30% ( 45km) under 3:50 pace and the rest easy pace ( MAF pace), 3 weekly hard runs, 4 easy runs. I felt it was the right mix for me, on the edge of over reaching. The template was more or less the same. Wednesday, a very hard track session, VO2max type of workout. Fridays were always the most daunting. While most of the crowd would wake up on a Friday morning saying TGIF, i would say MGIF ( my god it’s Friday). I wasn’t ask to, but i tried to do most of my tempos on the treadmill as it forces me to stick to a pace and not allowing me to slow down. It sucked, but I sucked it up… My hardest one was a 90min, ( about 23k), 4k easy, 3 x (15min @ 10k pace + 5min @ 3:50 ) – without break – 2k cool down. Friday nights… While some people would get high by drinking beer, i would get high by having a soba after killing my ass on the treadmill and sweating 3 liters of water.
Never a soba would taste like it did. It would bring me back from the dead, man! it always felt like the soul of 1000 unborn baby Phoenix blended into some kind of noodles. It tasted freaking good !
Then on Sunday, it was a hard long run that included a good portion at goal pace or faster, usually with my mates Stan and Derek which made my Sundays truly awesome !
Running is after all a very stupid sport, you put one foot in front of the other and you repeat the process until you cross a line on the ground that some guys you don’t even know drew the day before. Hence training cannot be too fancy, you just run, it all comes down to little details, running with friends is one of them.

Ice cream
Sharing a good post workout meal with your running friends is priceless. All of us towards the same goal, the same direction, working really hard and giving the best of ourselves for the same purpose. You train as hard as you possibly can without knowing the outcome. You struggle, you feel pain, worry, it’s a constant battle between you and your shoulders. A fight against an invisible devil that is hiding the details, week after week, when the final weekly run is over the same question remains “is that all you got ?”
You never know what will happen when the day comes but…
Sharing a huge badass ice cream after a 35k long run with your mates makes running – an individual sport by essence – a team spirit sport by heart. Once that mixture from heaven reaches your mouth, everything’s clear: you run not to be a sub-3, 4, 5 but because it defines you, as a A-type person, beyond a number and the pain that comes with it, we seek the best of ourselves so no matter what the outcome is, if i can answer to that question by “yes”. This is it.

Race week nutrition
I went a bit harder than Derek for race week:
– No caffeine in order to benefit its full ergogenic effect
Slow carb load:
– One single meal per day that consisted of 450g of yaki imo, a bit of butter, and some fruits after my run, to maximize glycogen repletion and minimize weight gain, from Monday to Friday ( so 90% carbs) Then Saturday, high carb but very light dinner.

The race starting at 12pm, first issue to address was the pre race meal. I skipped the breakfast from the hotel and went for a banana + daifuku mochi at 8am ( 300kcal) and a cliff bar at 10:30 ( 250 kcal) got my caffeine pill 40min before the start.
Then I had one isotonic gel 5min before the start and at 13k, 23k and 33k ( where the water station were) 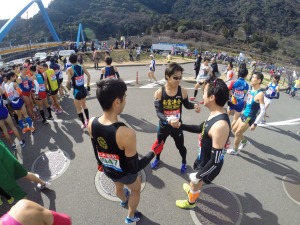 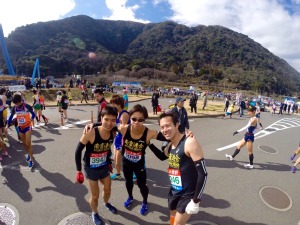 Let it go
As soon as I woke up my anxiety level was at peak. Ghosts from Seoul were haunting me and fear of DNF kept knocking in my head. While Stan and Gildas were enjoying a nice and warm pre race waiting area ( category 2 runners). Derek, Celine and me were freezing our ass under a tent outside their building. It was the rich vs the bums.
I tend to be superstitious as an important event approaches and take any random things as a good or bad sign. Random songs were playing in the background, when we went to drop our bags, the song “let it go” ( Frozen from Disney) was playing, cheesy but catchy and the title said it all: just let it go, fear doubts and any other negative feelings. Then we moved to the start and Derek said to me ” man you know what,  I have a good feeling about today”
He didn’t realize the instant impact those words had in me: I felt ready, i just let it go! 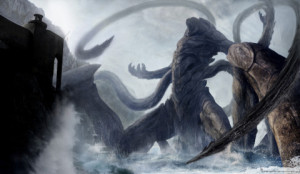 Namban Rengo
One week before the race, one of my padawan Yukiko sent me
“I want to inspire people, I want people to look at me and say because of you I didn’t give up”
People sometimes ask me how i can keep the motivation when being one the fastest of the group. I profoundly disagree with the very nature of this question. I don’t get inspired by fast guys (only) , i get inspired by people who put all their gut when training. You go to the track on Wednesday night, you ll find that’s what many people do. I have met through Namban Rengo fantastic people. Derek, Stan, Padraig, Philippe, Gildas, Chika, Yukiko, Pat… Just to name a few… If one day you think you ran too hard, go and see any of these guys. You think you ran too far?  go and see Mika. When I get to the track in a bad mood, I ll look for Naoko and high five her, I don’t recall seeing her not smiling like a kid or in a bad mood.

Last but not least I think one should always keep in mind that without Bob, none of this would have been possible. The dude is ageless and will kick ass for a long long time.

I will close this way too long report the same way I did for Seoul marathon:
I will be back ! 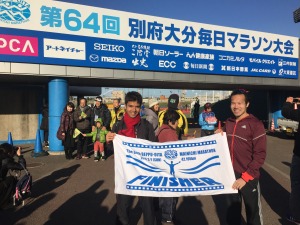 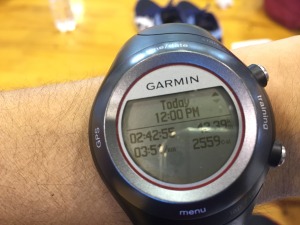