As part of my racing calendar of 2016 leading to my A-race in June, (Hida-Takayama 100km) I took part of the 26th edition of the annual Miyakojima ultra marathon on Sunday January 17th. As this is a B-race I joined the 50km event (the main being the 100km). Less than 24hour before the start, I almost made up my mind to DNS (not starting), eventually, the morning of the race I made a 180-degree and gave it a go.

As first timers in Okinawa, my wife and I decided to spend 3 nights there. We landed there on Friday, black cat, pouring rain, great, so we tried to find some place to eat local food. The next day we went to pick the race packet and as the weather was good, visited almost the entire island. Pictures of beaches on the net are not exaggerated, I had never seen the sea with such a pure color.

The race (course map) have you run along the coast around the whole island for the 100k and half of it for the 50km. 5:00am start and 11:00am start respectively. The elevation profile is fairly challenging, according to my GPS and google map, a bit less than 1200m of vertical distance on the 50km course, no brutal hills but it is however never flat. 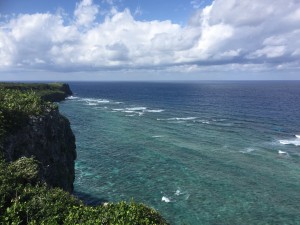 Since my last race back in September 2015, I’ve gradually built up my training to about 140km per week, 6 days a week with 3 easy runs, and 3 hard runs.

Since my switch to ultra marathon distance, my passion for the sport has been growing ever since. My weekly hilly long runs in the mountains (38 to 45km with 2000++meters of verticals) always gives me something to look forward to at the end of each week. So much that I always tend to overdo it when running up and down a mountain, running up very hard, and cruising down as fast as I can.

Over the weeks I believe some damages had slowly accumulated to the point that 10 days prior to the race, my post-tibial tendon got inflamed. Running was hurting a bit and wasn’t pain free. On Tuesday (D-5), after a 30min easy run, I felt it got worse so I decided to stop running until race day, testing my leg every morning and replacing runs with the elliptical instead (aka Brenda). The pain was improving each day but until the day before it was still bothering me. It was a tough dilemma. I’ve come all the way there, flight, hotel etc already paid, dragged my wife along to cheer me… all of that for nothing (?) My training was very good and I wanted to run (obviously !) but… I knew that I will have to pay the price after the race. And I knew that once I start, my pride would not let me DNF. It is stupid but I have this very stupid (did I say stupid?) mentality of “death before DNF“. Basically, if I start, I sign up a contract for no-running for an unknown period of time…

I spent the entire day thinking, trying to make up my mind. I felt sorry for my wife as she was trying to cheer on me and trying to make me enjoy the trip. Unfortunately my mind was not there, my heart was torn between two tough choices. I then wrote an email to my coach Andy and my friend Derek and ask their opinion. They were both slightly more on the side of “give it a try”. I was very reluctant still and decided to make a final call on the morning of the race.

… Are the words Bruce Lee had said during an interview. The weather forecast seemed to be historical for a race day, with 50km/h to 70km/h blowing to the North and towards East around 1:00pm, we were set to run most if not the entire race against the wind. Coupled with a very heavy rain, the conditions were “promising”. My leg was still not 100% but I eventually made a U-turn and found myself lining up at the start in the pouring rain.

The gun fired and it was a long ride (or should I say “swim”) to the finish. After only 10mins, I was already soaking wet. I had to run with my head facing down all the way to avoid the water getting into my eyes. I wasn’t sure what my position was as we were running with the 100km runners and my visibility was quite poor, but I knew that I was top 5 and that the first runner (last year’s winner) went out his way from the very beginning and took off at very fast pace.

During my training, I had run a sub-3 marathon as part of a long run at a medium/tempo-ish pace without too much difficulty, that is 4:12 pace, a pace that feels easy-ish/ medium-ish. But that day, with the strong wind , I felt sluggish, there was no room for a plan. I decided to run by perceived exhaustion, by feel, and trust my instincts. The weather will remain unpredictable during the entire event and I had no choice but to cope with it.. and to learn how to embrace it. So I ran, I ran without really paying attention to my pace but only making sure I was feeling right, not too easy, not too hard, with a breathing rate controlled at all time.

At about 23k, the course takes us the South East lighthouse of the island and making a U-turn around it, this is where I saw the top runner, I showed him my fist as a sign of encouragement, he responded by nodding his head, he was looking strong. I was second place at that moment.

Everyone was struggling in this weather, I was about halfway through the course. I was running alone and was feeling mentally low. Another 25k to go, 25k against this wind, how am I going to make it…Prior to the race I had asked my wife to wait for me near the lighthouse in case I DNF. She didn’t fail me. At my lowest point of the race I heard a sound of a car horn, it was her. I didn’t have enough energy to respond by a smile but my heart got warmed up again.

As the race progressed the pain on my leg was still there but remained constant and manageable. But the conditions were more and more harsh, the wind got stronger and stronger, the rain heavier, the course more and more hilly, stretches of road with 30cm of water were becoming more and more frequent. At some point the visibility got so poor that I could not see the terrain, with water in my ears and my eyes, I fell in the water and for a moment wasn’t sure what I was doing there. I got up immediately, didn’t look back and kept moving forward.

At about 27km, I saw the top runner that I saw 4km earlier at an aid station. He was getting some food but something was wrong, he didn’t seem to be in rush. Usually I try to minimise my time spent at aid stations, taking the strict necessary and moving on as quick as possible. But he was taking his time. I didn’t stop. I passed him and I told myself “you run straight and you don’t look back !” After 5min or so, one car passed me and kept a constant distance of about 30m in front of me and another one 30m behind me. I was annoyed and didn’t understand what they wanted from me. The weather was giving me enough trouble so what now? I realised after a while that they were part of the race organisers in charge of escorting the leader of the race. It felt weird but it gave me a boost.

My legs were so tired to run against the wind force that I could feel my energy drained very quick.. way too quick. I passed the 42.2km point in 2:59:20,

and with 5km to go, the weather finally calmed down. I tried to pick up the pace as I usually do during a long event, but the wind took every bit of energy from me. With very heavy legs, I tried to focus on my form and make sure I didn’t slow down too much. I knew my wife was never too far from me since the halfway point. The presence of your loved ones can be very powerful. Running is an individual sport. But I believe like everything else in life, if the hardships are shared in any way with the people you care about and that care about you, even putting your foot in front of the other can go way beyond just yourself. I eventually broke the tape in 3h33min.

A 4min summary video clip made by Celine here. 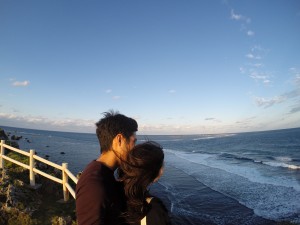