You’ve done a 100km ultra marathon before, how hard could a 70km be?

Said the voice in my head, as if stoking coals of Lucifer’s fire. Well, the September 2017 Hakusan Shirakawago Ultra 70km certainly sounded like a fun idea some five months prior, at the time of entry.

The elevation profile looked relatively easy compared to Hida Takayama or Nobeyama Ultra events, with Shirakawago having just a single, mountain to tackle.

So do I begin writing about… training?

Training – nothing more significant to note. One 30km run around the Imperial Palace (that’s six laps – I partially memorised the prefecture names looking at the pavement stones) and a 30km run up to Mitake with Harrisson two weeks prior. Also a casual but humid semi-trail run around Ashino-ko with Alan. Sorry no BBR or any science method here.

I recommend following Harrisson if you want solid training advice! I was actually quite excited about this race as it has been a long time since I have done an event together with Harrisson – maybe besides Tokyo Marathon, that Bestudai 2015 was our last event together? It was also our first ultra marathon together.

There’s no way to cut it, using any method of transport (train, plane or automobile), this race is difficult to access. For a group like ours, car is best given the surrounds of the early start is requiring one’s own wheels. Over 300km in a Toyota gave our group some bonding time. The day prior was registration (obtaining bibs , bottle of sake and receiving 1000 yen cash back for being a club entrant) but also allowed time to enjoy the delightful UNESCO Shirakawago site.

The race started at 5am, which meant waking up at just after 3am (!) to get some food into us. So no all-night karaoke the night then.

Arriving at the start of the event, the car ride was quiet, I think some of us were nervous (maybe Yuichi!? haha) . We were about 40 minutes which gave us some time to prepare. However, I had to go for a Mother Nature call and the queue was very long… I waited over 30 minutes and rejoined friends just a handful of minutes prior to the gun start.

The plan, if there ever was one, was to stick the pace at a leisurely 6 min/km, thereby clocking 10km every hour, to a total of 7 hours goal. From the start, Harrisson was eager to get ahead, I was eager to fall back, Yuichi had 30km further to run but he too was full of energy and soon dashed off after the first few kilometres.

Yuri seemed to pace herself well. However, everyone runs at a different pace, so I was slightly ahead after a few more kilometres. It was still dark, but getting brighter minute by minute. I crossed the 10km mark at 60 minutes, as planned.

The top of the mountain (1445m) came sooner than I anticipated. My GPS watch was miscalibrated and I thought I had to climb another 200m vertical. With all this conserved energy, I was like a kid on a sugar rush and floated down the hill.

To my surprise, Yuri was ahead, she must have passed me during my toilet break at the foot of the hill, and I caught her only on the downhill. She is clearly a strong uphill runner ! I passed the 20km marker shortly after in 2 hours, again as planned.

The downhill section is a beautiful area of Japan, and is worth the entry fee alone. I can now see why Harrisson has taken part in this event so many times.

Breathing the crisp morning mountain air and floating through the beautiful natural wildlife is like having a long conversation with a good friend. Every turn brings up a new canyon, a new horizon, another waterfall.

However, after the mountain ranges, in contrast, was a new section of the 2017 course. Previous years was always a 50km or 100km option, so the course was completely reversed and extended in 2017. The flat new section was gruelling particularly this year in the 28 degree heat. There was very little shade on the plain, in between rice paddy fields and basically you just have to continue in search for the next aid station.

At about 50 km, with about 20km to go, my left Achilles’ tendon gave trouble . I have never had such a pronounced pain in this area. My pace slowed. I continued along, jogging slowly as the main aid station was in sight.

About 3 km after that I slowed further to a walk, but merely seconds of walking, Yuri flew past and asked if I was ok. Grimacing, I then walked for only a few more seconds, then lifted and jogged once more, changing to forefoot to relieve pressure on the ankle. Like a cart with a broken wheel, somehow I managed the pain for the rest of the race.

With another 2km to go, the 70km course deviated from the 100km course and went up a long hill, including climbing up a flight of stairs for good measure. Now I’ve been in a few running events, but never has a section in the final few stages of an event been completely devoid of people. I mean not just lack of competitors, but no volunteer guides, supporters or even lacking people in the town. Not a criticism, just a strange feeling and one which made me think: have I taken the wrong turn, or maybe I’m really far behind?

Wait, where is everyone?

Chortling in partial disbelief, surely I can’t be that far in front. Soon enough though, as I rounded the corner, a lone supporter cheered me on, “You’re around 10th position” he said… this turned around my feelings, and pushed me to the end.

Then as the last hill approached (actually, every hill seemed the “last” on this dramatic final stage), I saw a yellow Namban singlet. It was Yuri, and she was battling it out. I could see she was struggling a little, and tried to encourage and run with her.

The battle was soon over though, as we crossed the finish within seconds of each other, Yuri managed to win the women’s division by a considerable margin, whilst I finished 12th, incredible given my lack of training. The plan of sub 60 minute 10 kilometres was done with plenty of room to spare, thanks to the downhill sections being taken faster than expected.

Harrisson dominated finishing 4th and he seemed to be waiting for us for a long time. He’s clearly got the magic.

Meanwhile, Yuichi was kicking hard and achieving the dream of sub 10h for the 100k course. Completely fried on a hot 28 degree day. I truly applaud his run, capping off a wonderful weekend.

Well, I guess sometimes you just got to have confidence and listen to that voice in your head. 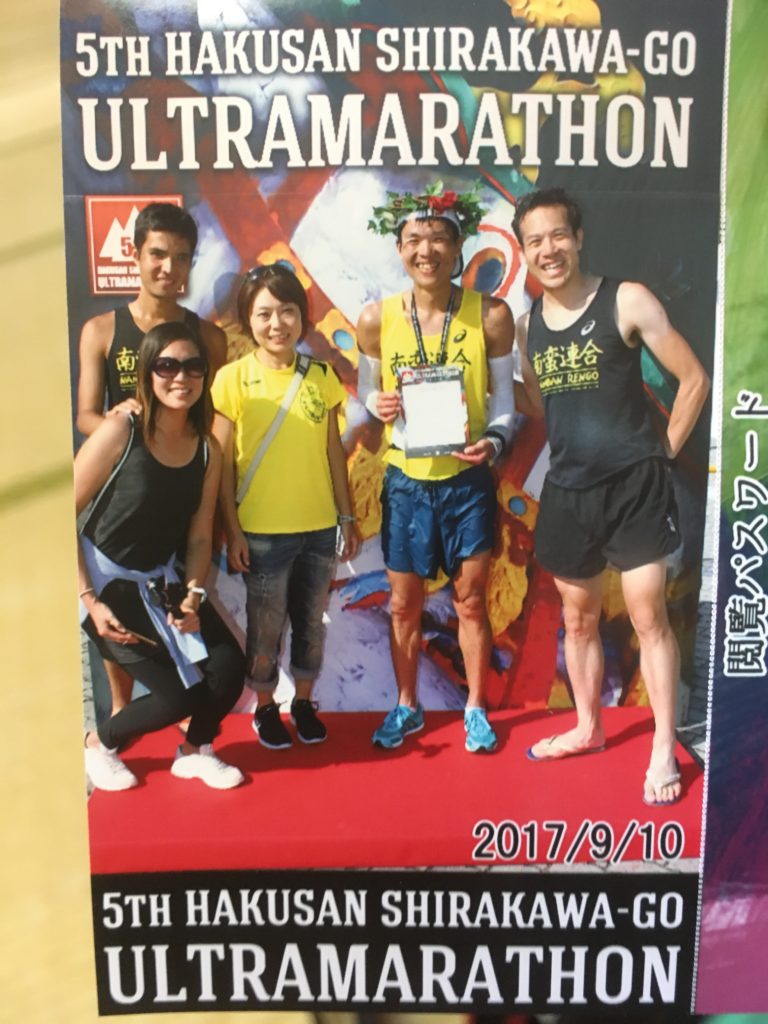 Full results can be found here: 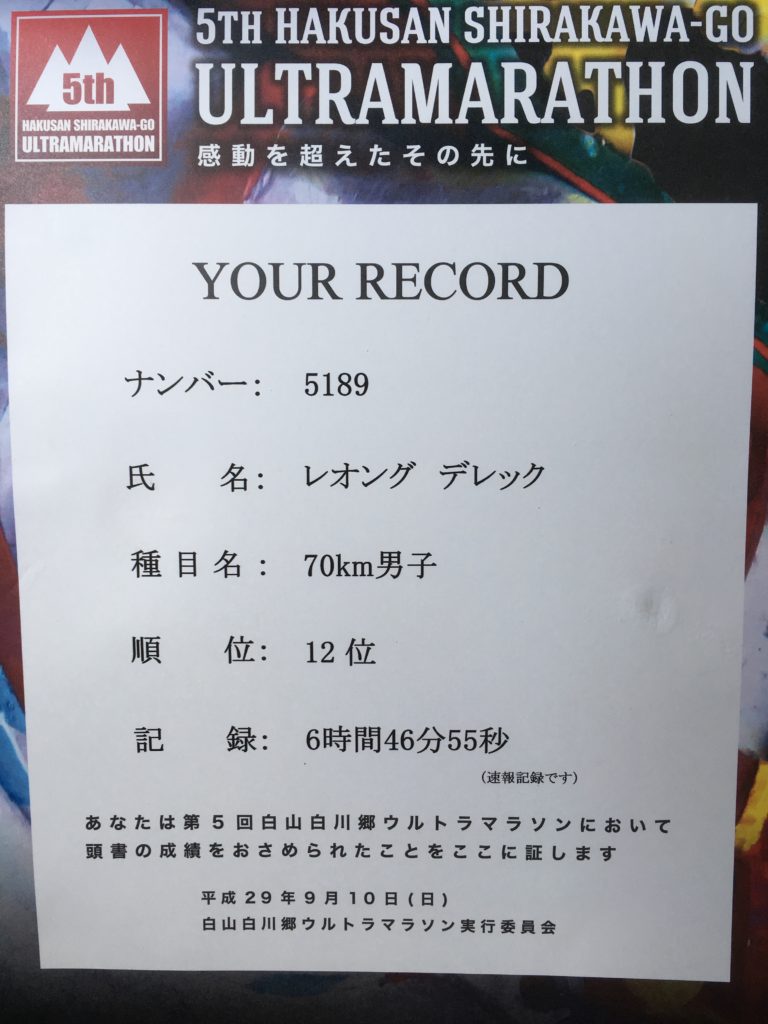