Scrolling across the massive number of articles on strength training for endurance athletes in front of my computer, my head got more and more confused. How many “Top 10 exercises for runners” articles have you seen? Do you recall?

This post is actually the second part of a two-part article (click HERE for the first part) that I started more than two years ago ! So it’s a long due. In the first part I talked about the reason why you would want (or not) to incorporate strength training on top of your running schedule.

Warning: it’s going to get a bit technical so if  that’s not your thing, you can close this page right now 🙂

We can roughly classify strength exercises into four categories: Balance, Endurance, Strength, Power. They are listed by order of difficulty, each subsequent category is dependent of the previous one: A strength exercise will require a good endurance and a good balance. Also one exercise does not necessarily belong to one category only, it can have a Balance and an Endurance component for instance.

Balance or stabilization is the human movement system’s ability to provide optimal dynamic joint support to maintain posture during all movements. In other words, balance/stabilization is getting the right muscles to fire, with the right amount of force, in the proper plane of motion (later on this below) at the right time.

Examples include: basic yoga poses, single leg squats performed at a slow speed, most exercises performed on a stability ball or any other modality challenging your balance.

Muscular endurance is the ability to produce and maintain force production for prolonged periods of time. Improving muscular endurance is an integral component of all fitness programs. Developing endurance helps increase core and joint stabilization/balance, which is the foundation on which Strength and Power are built. Every exercise where the balance aspect is not challenging or that has been mastered, fall into this category if the number of repetitions is high enough: high repetitions is the most effective way to improve muscular endurance. But again, if you want to repeat a movement numerous times, your balance should not be an obstacle.  Another type of exercise that trains muscle endurance are the ones where you hold a static position for a certain amount of time, aka Isometrics. One of the most popular example of Isometric is the Plank. You train your core to sustain a constant load, which trains the stability and endurance

Muscular raw strength, to put things simply, is the maximum load you can move from point A to point B. The heavier you can lift the “stronger”you are. When the workout is having you lift a weight with a very low number of repetition (between 1 and 5 typically) and with a heavy load such that you feel almost maxed out on the last rep, that it is a strength exercise. Three repetitions of a heavy barbell squat that maxes you out on the last rep is a good example. To do this properly, you need to have very strong stabilizers and have a good muscle endurance (on top of having a good form too !)

When the speed component is involved during an exercise, we enter the domain of power. Power is the ability of the neuromuscular system to produce the greatest possible force in the shortest possible time. Power adaptations build on stabilization and strength adaptations and then apply them at more realistic speeds and forces seen in everyday life and sporting activities. Explosiveness is what you are training when doing this type of workout. Typical examples of power exercises include squat jumps, box jumps, hoping, power skipping, clapping push ups, burpees etc. This category is also known as Plyometrics.

Running is in essence a “power” sport

Why? During the full running cycle, the phase where force production is at its peak is during ground contact. Ground contact time typically varies from 300ms to 150ms. It is during that short instant that your body must produce the force necessary to propel your whole body forward. So you only have a split second to absorb three times your body weight AND release enough energy to move forward. The more energy you are able to release in a given amount of time, the faster you are, and this is the definition of Power. So you may be the strongest animal on the planet, capable of dead-lifting 300kg, but if you’re not able to release that strength in a very short amount of time – in other words, if you lack power –  your strength is useless. That’s why you won’t see any professional endurance athlete trying to max-out their Olympic lifts. Strength without power is useless for runners.

Now, I know what you’re thinking “shouldn’t I do exclusively power-type of exercise then?” Well, first as stated above, power builds on strength. Second, take a look at the graph below: 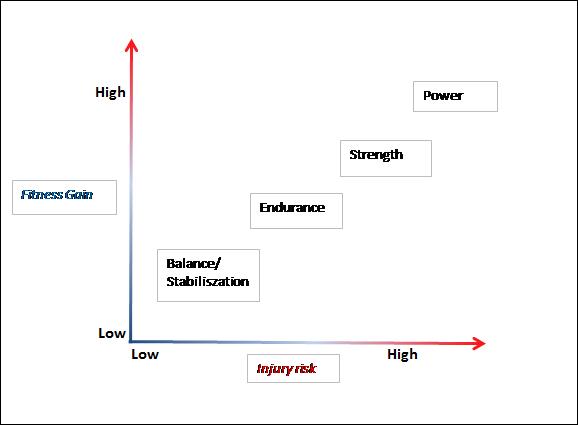 Plyometrics can be very stressful, and running already puts a high physical stress to the body, so the injury-risk factor should not be neglected

The principle of specificity

Whenever you choose to work on an exercise, you should always ask yourself how specific it is to running. The more specific the more it will have the potential to improve your running economy. The less specific the faster the law of diminishing return will apply. It is fairly easy to guess if an exercise is specific to running or not. Just taking the very basic characteristics of running:

Now let’s take the example of the famous Plank exercise:

Planks are not running-specific at all, in fact it has nothing to do with running and the law of diminishing return will hit very quick. Does it mean it is useless or bad? Definitely no. If you can’t hold a clean plank position for say 30 seconds, it means you have a weak core and training to achieve that will give you benefits for your daily life in general. But, training to hold a Plank for 5 minutes will have no effect on your 5km time trial. Now that being said, highly running-specific is not always good neither. For example, one leg skipping while holding dumbbells over 200m is very specific, but it is also extremely stressful on your lower limbs and it will most likely hurt your performance on your hard running sessions (track intervals etc).

In other words, there is no good or bad exercise, and doing only running-specific workouts is not necessarily good as you’ll be putting stress on muscles that are already  heavily used during running. Balance, timing and consistency are key when incorporating strength training to your running regimen (more on that in last paragraph)

The 3 planes of motion

The Sagittal plane passes through the body front to back, so dividing it into left and right. Movements in this plane are the up and down movements of flexion and extension. Running is done primarily on that plane. The main pros of working on this plane is that it is highly running-specific. The cons is that you will not address any weakness you might have on other planes. Lunges are a classic exercise that is sagittal plane-centered for instance. However, running, involves all three planes, and more often than not, runners tend to neglect the other ones, and also more often than not, runners tend to be  weak when it comes to planes other than the sagittal one.

The frontal plane divides the body into front and back. Movements in this plane are sideways movements, called abduction and adduction. Imagine yourself facing a wall, all movement you do that is parallel to that wall is a frontal plane movement. For example, moving your hips up and down while in a side Plank position is a frontal plane – centered exercise. Training on that plane will challenge your side core.

Also know as the rotational plane,  divides the body into top and bottom. Movements in this plane are rotational in nature, such as internal and external rotation, pronation and supination. As opposed to cyclists, our spine is never in a neutral position, we rotate from the hip constantly during the running stance, changing direction and twisting at each stride. Hence, it is very important to include exercises challenging that plane of motion to keep a good mobility and balance in the hip area.

How to periodize and incorporate it into your running macrocycle

Let’s start from the end. The closer you are from your race the more “advanced” you’d want your exercises to be. Ideally a good balance of plyometrics and strength. During the final 8 weeks leading to your A-race, nothing new or too stressful should be introduced. Strength training should be in a maintenance mode and your focus should be put on running, especially your goal pace runs.

Now, that being said, you want to build gradually. You start with balance and endurance type of exercises (planks, push ups etc).  Then once you feel comfortable, you can hit the weight room and lift some heavy weights with a low number of repetitions. During that time you would also want to do easy plyometrics. Then after that, You would include more explosive type of training, running specific into your regimen.

There are many of course. Jumping lunges, single leg squats at high speed, hoping, single leg rope jumping etc. But personally, my favorites are hill sprints (Strength training is not synonyms of dumbbell). It is super running specific, requires a ton of power, a great deal of stability and endurance and has much less pounding impact than actual running on flats.  Yet it is different enough from actual running to be considered a ” strength training” exercise: Sprinting 10 seconds all out on a 15% hill is very different from running 42km for 3+ hours !

Here is just an example to illustrate what a program can look like. All year long, you should be able to perform the most basic exercises. For my part the minimum is to be capable of doing

From 16 weeks to 12 weeks out of the race: adding some endurance type of exercises, with typically 8 to 12 reps, and choosing exercises more specific to running

From 8 weeks to 2 weeks out: keep the same routine, then from 2 weeks to race day, divide all the reps by two. Again this is just an example to give you an idea, but the possibilities are endless and depends only on your fitness level and the time you have.

It’s a probably a lot of information, but let’s try to summarize in a few bullet points