Debut Ultra Marathon
It’s all in the preparation. And for me, it was mostly mental preparation.

In short: Think about your full marathon training.
Now reverse everything.
This was a learning curve or rather an unlearning curve.

Ultra is technically anything above 42.195km marathon distance.

Chuckles. Well you might as go all in, right? 100km entry box ticked, mouse clicked.
Done.

Wait… WHAT HAVE I DONE? 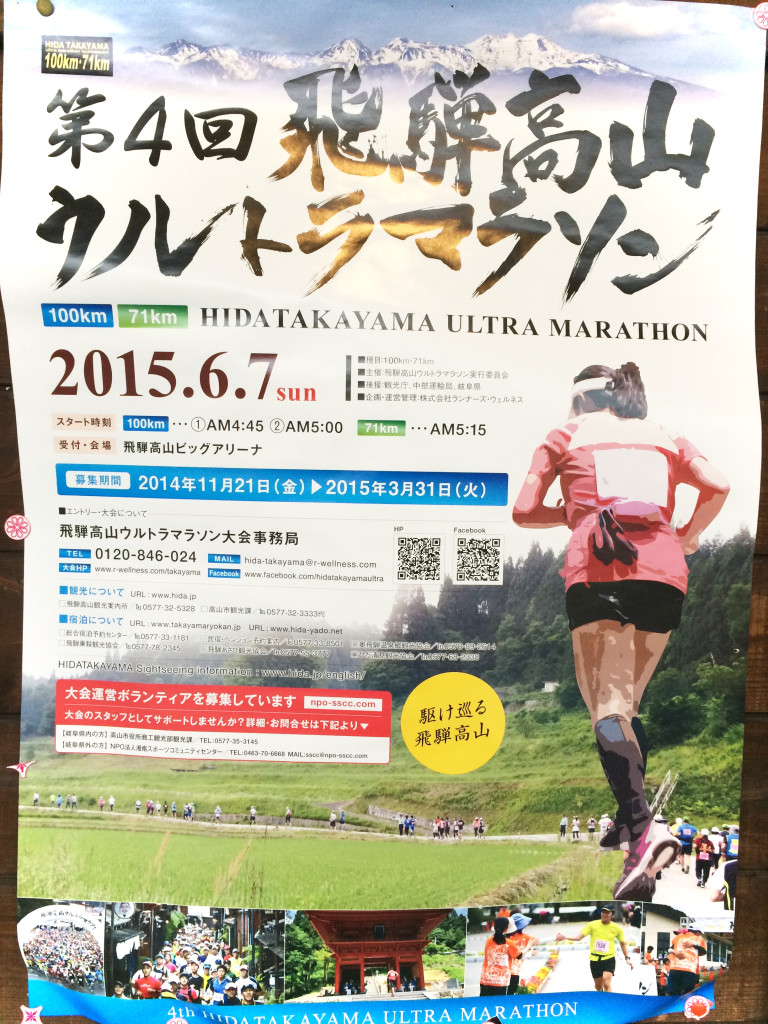 So exactly how do you prepare yourself for an ultra marathon?

Unlike a marathon where you want to get your balance of endurance and speed, here I was not looking for speed.

I was in the pursuit of endurance. No serious track work then.

Full marathon training usually involves running up to 75-80% distance (building up to 35km is the standard technique). Throw this out the window, no mathematician needs to tell you that 75% of 100km is a very long distance for a training run.

My shoes are generally light but not totally minimalist yet pretty thin on cushioning. These stayed on the shelf during the preparation and race. I needed more padding and although I tried fairly thicker soled shoes (mostly very comfortable, but I couldn’t bear the weight), I opted for the compromise of somewhere in between for comfort and weight.

The original plan was to run this event with two good friends from Namban but unfortunately they had genuine reasons for dropping out in the lead up, so I absorbed as much information I could get about the race.

From this, I gathered this course would be hilly so I set about doing training in Mitake-san (coincidentally, one of the best secret hill training places closest to Tokyo) near Ome.

One weekend I set out to try going to the top and back four times. I failed, only managing three times, about 2200m total elevation rise, before sensibility took over and legs had nothing left.

Was I ready for an ultra? No. Foolishness. But who ever said ultra marathons are sane?

The Race
Hida Takayama City, Gifu prefecture, is set west of Nagano prefecture, just under two hours driving from Matsumoto city.
The surrounding landscape is mountainous and filled with ski slopes including a popular Mount Norikura which is on the drive from Matsumoto.

This year there were about 2000 participants. It was held on the Sunday, starting at 4:45am, and registration was the day prior.
On race day, the weather conditions were favourable, cool breeze, slight cloud cover. No rain.
I woke up at about 2am to get ready and get to the start line, so it was early to bed on Saturday night.

I was glad to bump into Brett Larner in the morning who was a staff member helping out the foreigners.
After dropping off the two bags, one for the 57km point and one for the end

About 1700 participants running the 100km and 800 people doing the shorter 71km course.
The best thing about the course was that it was mostly in the mountains where it was cooler due to the altitude and tree cover.

So after I put on sunscreen in the darkness, I joined the first wave gathering for the 4:45am start.

The first few kilometres were taken slow with the “Pass No One” mantra repeating in my head. There was nice scenery as we passed through the historical part of the town.

After going through the town until about 40km, the course was predominately a gentle uphill. This was a great help to keep a steady pace. If the course was a downhill at the start, I think I would have found it easy to run too fast and burnt out.

Unsure of the positive benefits of drinking sake in a race, I stuck to custard bread and cola.

Fortunately, I did not consume the onigiri, which was later reported for some to have had gone bad, probably due to being left out in the sun too long. A handful of runners were unlucky.

The full marathon 42.195km point was marked on the course and I passed this in under four hours which was more or less on target. A bit further 50km I felt fresh still and was just over 4h30m there. Last gel consumed.

About at this half way point, I got the idea that doubling the time will still leave me with an hour to play with for a sub 10 hour time.

The town hall was soon approaching. This was the 57km point, and quite a few supporters had gathered to cheer. There was a band playing, buckets of water, sprinkling hose, food and drinks. A group of school kids lined up to high five you going through.

Continuing on, about two kilometres later, it dawned on me. What about my drop bag? I got caught up with the atmosphere and missed going inside the town hall! Total rookie error!!

Annoyed but not the end of the world. Just do the last 50km on no energy gels and whatever was provided at the aid stations.

Approaching the 60km I knew from reading the elevation map, there would be an extremely steep hill, even including stairs to the temple at the top. In hindsight, I should have walked this section so save energy for the end, and I didn’t gain a great deal of time slowly running. Anyway, it was a tough hill, not helped by not knowing exactly when it would end.

After the descent, it was a slow, gruelling uphill slope up until 85km. Plenty of time to do some maths for final estimated finishing time. I worked out going at the steady pace, with a slight push, I could potentially do a sub 10 hour.

I was getting quite dehydrated on the relatively flat (read: slow up) and open section of the course. I consumed water at the aid stations, but it wasn’t quite enough. I saw someone’s house on the course had a tap out the front. So I went towards it, but as I approached, the owner, an old man, stepped out. I asked if I could use the tap, he said, oh that valve is broken. He said wait a moment, he’ll go in the house to get something. I think I waited for about fifteen minutes, but it probably was more like two minutes, when he came out again with a cup of water. Thankfully I found the value of water greater than the time lost, and said my arrigatos and then departed.

All of this maths about sub 10h went out the window when I encountered the final hill at the 85-90km point. My legs had simply no strength left in them. Slowed right down to walking for a few kilometres until the road turned downhill.

The last few kilometres were fuelled on the spirit of finishing, making sure I did a sub 11 hour time and the dream of a post race onsen. It sure felt great to finish, but the post-race onsen and chilled beer felt like pure heaven. 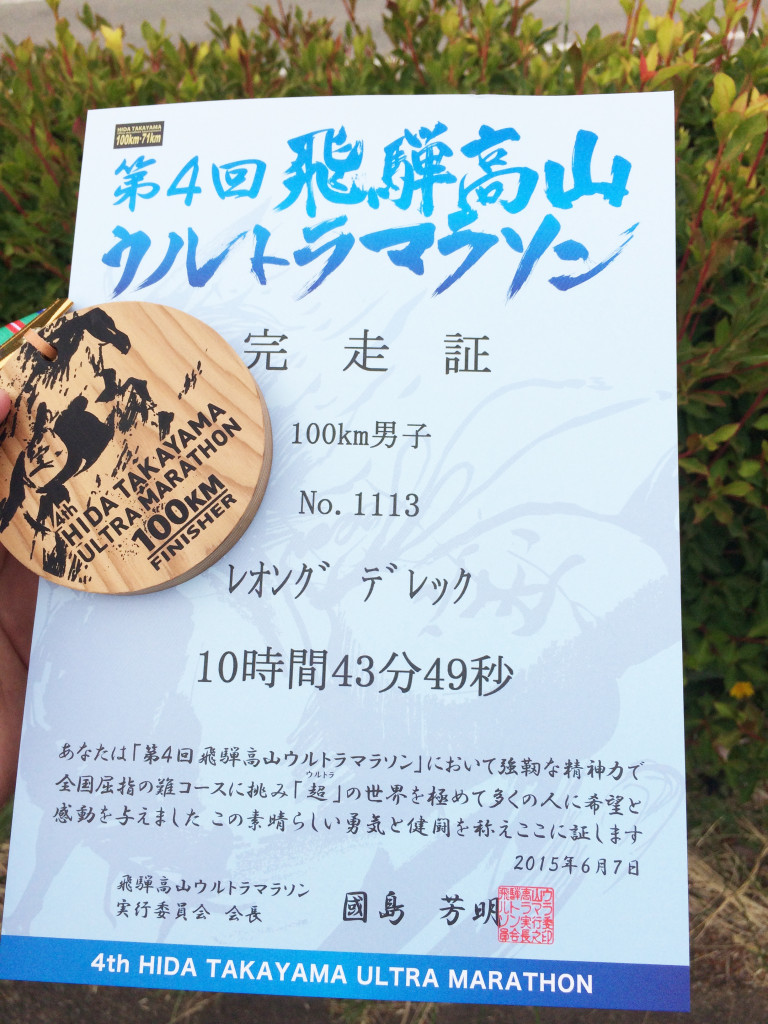 *the winner of the 71km course is a university ekiden runner who averaged approx. 3m59s/km pace, finishing in an incredible 4h 47m 30s. He passed me mid way through the course (as with everyone other runner) like we were all standing still.