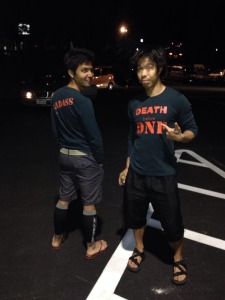 Under Stan’s suggestion, I signed to that race, but for the 30k version.
Stan did the 66k, Gildas and I went for the 30k without any clue of what to expect. Thinking that 30k would be an easy walk in the forest, the night before Gildas and I were like “ok let’s have a look to the map to see what to expect at least” and it said “1,650 meters uphill and 2,363 meters downhill ” WTF??
Only 1 aid station??!! I hadn’t brought any hydration gear, thinking it would be easy …
We both cursed Stan, bad motherf… alhgouth the dude had 66k and a feeling of compassion came right away 😛

At the start, I was the only one not caring anything with me. 95% had a camel’s back, and the other 5% had at least a bottle of water…
With not so much training after recovering from IT band issues and glutes inflammation, I just wanted to finish in a good shape and not dehydrated.

I started mid pack since my ambition was low. But as soon as the gun went off… I just ran hard the first kilometer that was purely uphill and spent most of my time passing people. Since the key in a trail is energy management, I immediately took it “easy” the next 7k of downhill (10% grade maybe?)
I then reached the 10k mark with the first and last aid station, drank some water and took off immediately, I was still feeling very genki.
At 15k, I took a caffeinated gel (first and last): I had the good idea to bring with me an isotonic gel, meaning a gel that doesnt need to be ingested with water (which could have been a disaster with 15k to go without fluid)
Gels are usually hypertonic, it changes the osmolality of your gut, can thicken your blood if taken without water leading to premature dehydration. Isotonic drinks/gels has the same concentration as your blood, it just takes a bigger space in your pocket …
It took effect with 10min and I felt super genki. As usual all the runners I passed was during an uphill section. And of course I got passed on the downhills… I can say that I kick ass big time when going up. Going down is another story, my ass gets freaking kicked all the time.

At arround 17 or 18k I got lost in the forest for a bit, went out of the trail for a good 5min, not sure how many place I lost during that time :S. Luckily I have found my way back pretty fast (another nambaner wasnt that lucky…)
My legs were getting really tired from the downhill sections, especially after a 20% slope at about 25k.
I got passed by a dude 1k to finish. The dude kicked me by 30seconds… bad motherf….

not sure how many runners, probably between 500 and 600.
It took me 5 days to recover.
Overall a fun and tough race, even though I could survive, the lack of aid station was definitely a minus.
Mostly runnable, some really steep and technical downhills but quite short.

After a LONG triathlon season this year, I decided I would have a bit of fun during my offseason in doing a 66km(3000m+ altitude change) mountain race.
Resting a few weeks after IM Canada (July 25), I never managed to train too seriously for this event. I completed a handful of very long runs between (35km to 50km) and a lot of hikes over the weekend but it just wasn’t enough training.

As for the race, the 1st 10km were on the road and with such a early 6am start, it was a very nice warmup. The trail then followed a river ravine where it was a bit difficult at times to navigate over boulders without getting your shoes soaked. Fortunately, the weather turned out to be perfect (bit of cloudy with sunny patches) so the experience was somewhat fun. It was a long slog to the top of Mt. Hotaka (1825m) but I was greeted with a magnificent view at the top. 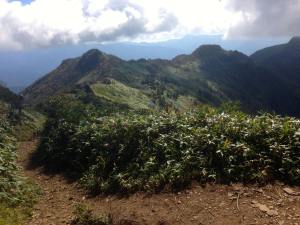 I wasn’t concentrating on placing high so I really took my time on the descents. There was also quite a bit of a log jams at various places that had ladders but after a few kms, the trail became runnable.

However, about 40km in and right before A4, I rolled my right ankle which also happened the previous week on a hike. I took some time at the aid station to really massage it and thinking it was gonna be a long wait for a ride back to the finish if I DNF but remembering Harrison’s mantra “Death before DNF”, I might as well just finish it. I was now super conservative and took it really easy on the descents but was able to manage a shuffle/jog on the runnable sections. The last section was almost all downhill and I think like 20-30 people must have passed me. Still, managed to eventually find my way back to the finish before it got too dark. Glad to have saw Harrison and Gildas waiting for me just before the finish line so managed one last sprint..

Jack of all trades, master of none