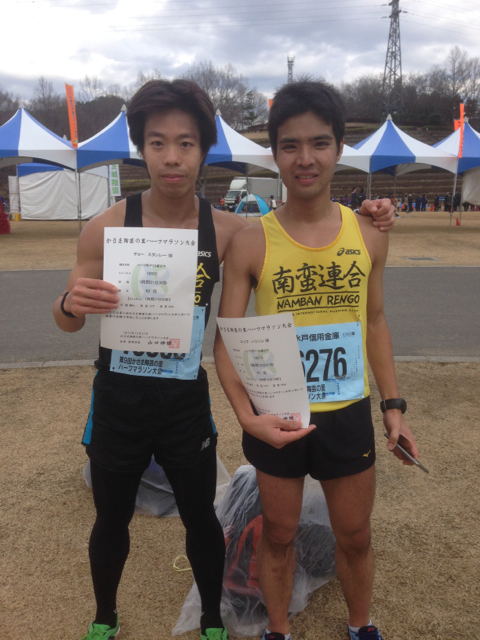 Pre-race
It’s been more than 1.5 years since I’ve focused on running so going into my triathlon offseason, I figured I would properly train for a marathon again (Beppu Marathon in Feb 2015). With not many races to do a benchmark test about a month before my target race, Harrisson suggested the Kasama Half Marathon in Ibaraki, roughly 2.5hrs from Tokyo.
Joining me was Harrisson and his wife Celine, Satohi and her friend.

Race
It was the Namban Bonnenkai the night before so I unfortunately had to abstain from over-eating and partying. The race started at 10:40 so there was plenty time to get to the venue. The bib number and IC tag was sent by mail and everything was very well organized so there was not much to worry about aside from the course. The elevation profile showed 2 short steep hills at the 3km and 14km point and some undulating hills along the way.

I lined up with Harrisson about 5 seconds from the start line who was targeting around a 1:20. My initial goal was around sub 1:23 so I figured I would try to keep Harrisson within my sights for at least the first half of the race. Conditions were perfect for running with sunny/cloudy skies and a temperature of 10-12 degrees and maybe a slight breeze. With the first 1-2km mostly downhill, it was inevitable that everyone started off fast (opening mile was 5:53 which seemed easy). I was able to overtake quite a few people on the first uphill at 3km but my time probably averaged out taking it easier on the downhill afterwards. The course then began to stabilize for the next 3-4 miles and my running pace as well. I held about 3:50/km and that never really deviated throughout the remainder of the race. There was a pack of 4-5 runners around me who were running the same pace so that was nice company to have. Further ahead of me, I was still able to see the back of Harrison’s yellow Namban singlet but it gradually got further and further away. The other steep hill after the 14km point proved to be a bit tough but the nice gradual descent was great for keeping a steady pace. There were other people that sped up in the last 5km but I figured since I had already ran fast enough in the first 5km to warrant a big PB, I decided to try to finish with the same sort pace. The race might have been 100-150m long but oh well, it was great to finish with a nice sprint.

Post-race
After the race, we waited for the others to finish and we all went up to a local Ofuro albeit super packed. Overall, it was a great event and definitely a good race to recommend for anyone looking for a HM late December. Oh, and instead of a lousy finisher t-shirt or towel, everyone got locally made ceramic cups which was quite cool (ceramics/pottery is famous around that area)

The race marked the end of week 12 of 18 marathon buildup and in the previous 15 days, I had put in a pretty big training block (~300km of running including two races, Okutama Ekiden and Mitake trail run) so I wasn’t quite sure what I was capable of especially given the somewhat hilly course. My previous best was 1:23:59 back in March 2013 so I was more than ecstatic to take my running to new heights. But more importantly, with 6 more weeks until my target race, I now have a pretty good idea of what my marathon pace will be (assuming I stay healthy)

Congrats to Stan for the big PB !
Not much to add on my side to the race organization itself. The event went well on my side. I believe I’m in a PB shape for a HM but on a flat course so knowing this one was not PB friendly (ondulating course, plus a few steep hills), my target was to run a low 1:20 race.
I started conservatively (except maybe the first kilometer where was I was dragged by the crowd) and set up at a good pace and ran by feel checking the garmin only as an information purpose. As I did a crapload of hill work on the treadmill, I was able to maintain a sub 4:00 pace on all the uphill section without loosing speed after each climb.
I crossed the halfway point in 40min so I was on pace to run a low 1:20 provided that I dont slow down. My legs didnt gave up on me and I was able to push through all the hills until the end, including the last hill 500m before the finish.

But man, the onsen after the race was so ridiculously packed and the way back, 2.5 hours of train back to Tokyo… prepare to spend the whole day if you want to run that race.

Jack of all trades, master of none